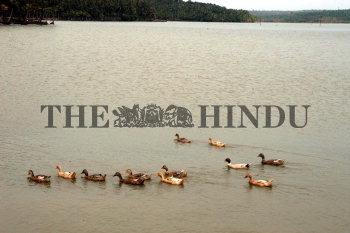 Caption : The monsoon showers have recharged the Vellayani lake, a large freshwater body in Thiruvananthapuram, which is now under threat from rampant pollution and moves to reclaim its banks for paddy cultivation. Photo: C. Ratheesh Kumar, 09/06/2005.