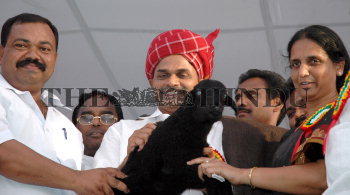 Caption : Congress leaders from Ibrahimpatnam mandal presenting a lamb to the Andhra Pradesh Chief Minister, Y.S. Rajasekhara Reddy, at the Rythu Sadassu organised by the Ranga Reddy district administration in Hyderabad on June 2, 2005. The Minister for Mines and Geology, P. Sabita Indra Reddy and the Minister for Major Irrigation, Ponnala Laxmaiah, are also seen.