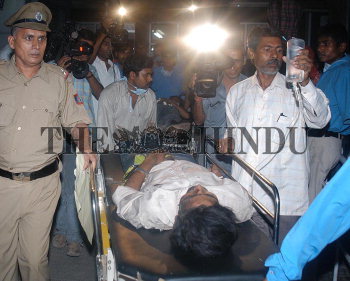 Caption : One of the injured in the cinema halls bomb blast being brought at the RML Hospital in New Delhi on May 22, 2005. At least 30 people are feared injured when powerful bombs tonight rocked two cinema halls in the capital during the screening of Sunny Deol-starrer controversial movie "Jo Bole So Nihal" to which several Sikh organizations have taken objections. Official sources said the first blast occurred at 20.30 hrs in Liberty cinema hall and the second in Satyam cineplex 15 minutes later. The injured have been rushed to various hospitals. Photo: V. Sudershan