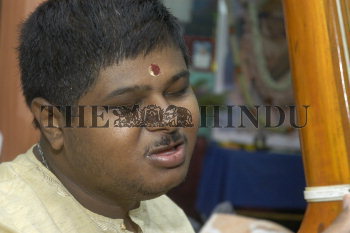 Caption : S.R. Maruthi Prasad, a visually impaired Carnatic vocalist, in Bangalore. Since the age of seven, he has sung in public, both here and abroad. He secured distinction in a "vidwat" examination in Carnatic Vocal in 1998. And his gurus include Lalitha Panthulu, Rajashree Arvind, and the late Chintanapalli Suryanarayana Rao. In December 2003, Maruthi sang for the President A.P.J. Abdul Kalam. This was in New Delhi when the President gave him a National Award for being a `Creative' Disabled Person. The award, given every year, is one of many instituted by the Ministry of Social Justice and Empowerment. Photo: K. Gopinathan, 16-5-2005