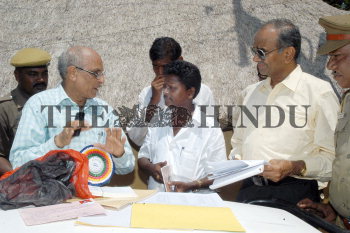 Caption : ELECTION Commission's Special Observer K.J.Rao, asking the ELECTION OFFICIALS to confiscate the vehicle pass given to the ELECTION agent L. Loganathan (Independent) on the ground that DMK's flag was found in his car at Perandur, in Gummidipoondi constituency on May 14, 2005. Photo: V. Ganesan