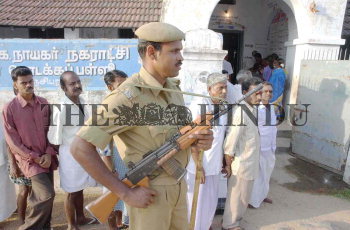 Caption : Large number of men and women turned out to vote in Kancheepuram by election on May 14, 2005. Large security arrangements were made at Pillayarpalayam to avoid any incidents where the area is considered to be very sensitive. Photo: S.R. Raghunathan.