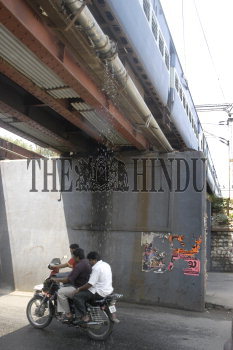 IF YOU ARE CROSSING SUBASH NAGAR RAILWAY UNDER BRI

Caption : If you are crossing Subash Nagar Railway under bridge, watch out, you might get a surprise shower. People who had to wait in the hot summer sun for nearly an hour to cross Rajajinagar entrance to Railway UNDERBRIDGE in Bangalore, suddenly feel cool as a leak in the water pipe above shower water on the vehicles. Two wheelers who were caught in between bigger vehicles and water from above shock them for a while which might lead to an accident. Photo: K. Gopinathan 12-05-2005