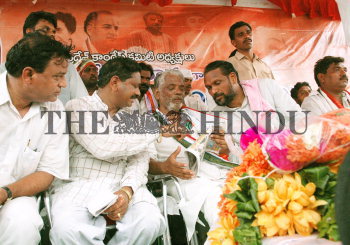 Caption : The PCC president, K. Keshava Rao, the Minister for Commercial Taxes, Konathala Ramakrishna, the Bheemunipatnam MLA, K. Seetharam and the VUDA Chairman, P. Suryanarayana Raju, discussing a point on an item published in a Telugu daily during the public meeting at Pandrangi village, where his 'shanti yatra' concluded in Visakhapatnam district on May 06, 2005. Photo: C.V. Subrahmanyam