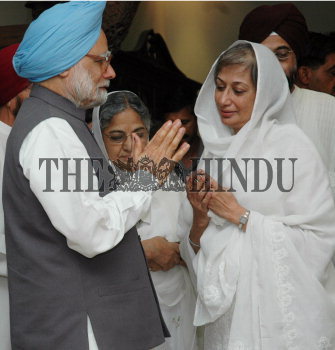 Caption : The Prime Minister, Manmohan Singh, consoling Anita Kalra, DAUGHTER of Lt. General (Retd.) Jagjit Singh Aurora, while paying homage to the mortal remains of the war hero at his residence in New Delhi on May 5, 2005. Gen. Aurora, former commander of the Army's Eastern Command passed away on May 3. He was 89. Gen. Aurora commanded the troops in the liberation struggle of East Pakistan, resulting in the surrender on December 16, 1971, of 90,000 Pakistani soldiers. For his leadership during this operation, he was honoured with the title of Padma Bhushan. He was also the recipient of the Param Vishisht Seva Medal and served as Member of the Rajya Sabha. Photo: Sandeep Saxena