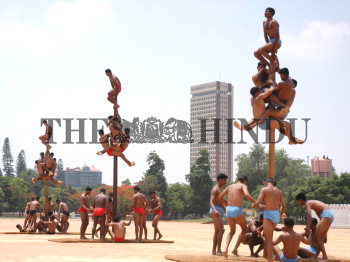 Caption : Marata Group performing `Malkhamb' at a dress rehearsal of the 'Know Your Army' exhibition on the Indian Army at Manekshaw Parade Grounds in Bangalore on May 04, 2005, that is set to be inaugurated by the Karnataka Governor, T. N. Chaturvedi on May 06,2005. Photo: V. Sreenivasa Murthy