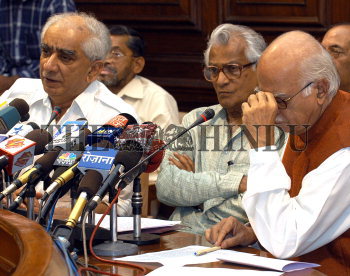 PRESS CONFERENCE BY ADVANI AND GEORGE

Caption : The Bharatiya Janata Party (BJP) president and Leader of the Opposition in the Lok Sabha, L.K. Advani (ext right), at a press conference after the National Democratic Alliance (NDA) meeting at the Parliament House in New Delhi on May 4, 2005. Also seen are the NDA convener and president of the Janata Dal (United), George Fernandes (second right) and the BJP leader, Jaswant Singh. Photo: Shanker Chakravarty