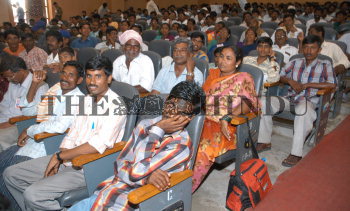 Caption : Karnataka State Dalitha Sangarsha Samithi members, who gathered from all over the State for the inauguration of State level seninar on 'Integration of exploiters' as part of Ambedkar birth anniversary, slept on chairs after waiting for more than two hours for the Chief Minister, N Dharam Sigh and Member of the Paliament, National President of Republican Party of India, Ramdas Athawale in Bangalore on May 03, 2005. Photo: V. Sreenivasa Murthy