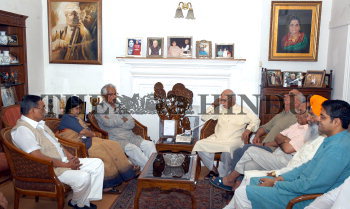 Caption : BJP President and leader of the opposition in the Lok Sabha, L.K. Advani, along with NDA convenor George Fernandes, and other leaders at the NDA meeting in New Delhi on May 01, 2005. Photo: Shanker Chakravarty