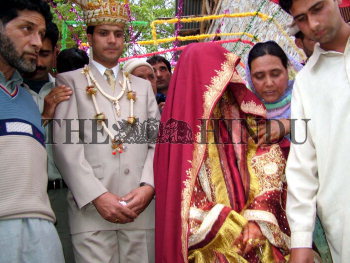 Caption : A Kashmiri bride Samiya Hayee who got married to her relative Ajmal Basharat, a resident of Pakistan Occupied Kashmir, leaving her house with the bridegroom on May 01, 2005 at Bandipora in Baramulla district of North Kashmir. Ajmal was among 30 passengers who arrived in Srinagar on the first bus between Srinagar and Muzaffarabad on April 7 and tied the nuptial knot with a Kashmiri girl. Photo: Nissar Ahmed