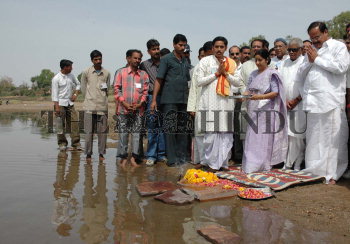 Caption : Former Union Minister, Member of Parliament and BJP National Vice President M. Venkaiah Naidu, along with former Union Minister Sushma Swaraj, Madhya Pradesh Chief Minister Babulal Gaur, offering prayers at the Narmada River at Shahganj in Sehore Disstrict, 75 kilometres from Bhopal on April 29, 2005, before laying the foundation stone for the Narmada Water scheme for Bhopal city. The project worth Rs. 240.22 crore will solve the drinking water problem of Bhopal city and Narmada water will be available to the people within three years. Photo: A. M. Faruqui