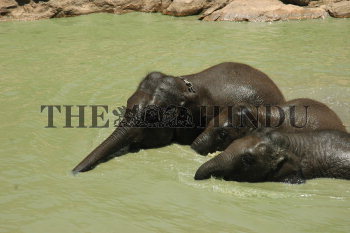 Caption : The young she-elephant Veda (ext left) along with the other elephants of the Bannerghatta National Park near Bangalore on April 29, 2005. India's plan to gift the nine year old Veda as a mate to a lonely elephant in the Yerevan Zoo in Armenia, was called off by the Prime Minister's Office, following the Karnataka Governor T. N, Chaturvedi's letter and the appeal of people from all over the world against this move. Photo: K. Murali Kumar