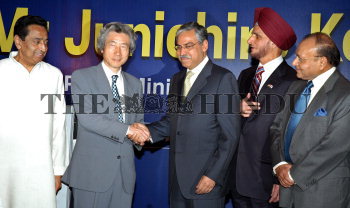 Caption : Prime Minister of Japan, Junichiro Koizumi, being greeted by the President of the CII, Sunil Kant Munjal, watched by Mahendra K. Sanghi, president of Assocham, Onkar S. Kanwar, President of FICCI, and Kamal Nath, Union Minister for Commerce and Industry, at a meeting with the members of the three chambers in New Delhi on April 29, 2005. Photo: S. Subramanium