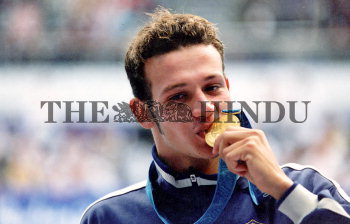 Caption : Italy's Domenico Fioravanti kisses the gold medal that he won in the men's 100 metres breaststroke swimming event in the Sydney Olympics on September 17, 2000. He won the event with a new Olympic Record. Photo: Vino John