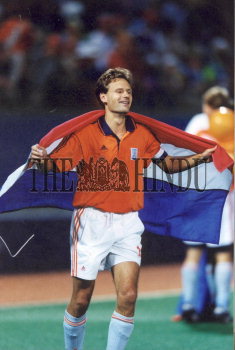 Caption : Stephen Veen, captain of Netherlands hockey team, celebrates with his national flag after Netherlands beat Korea in the final to win the gold medal at the Sydney Olympics on September 30, 2000. Stephan Veen scored a hat-trick in the final. Photo: Vino John