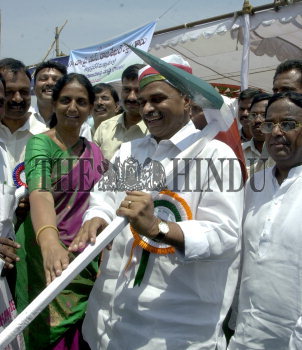 Caption : The Chief Minister, Y.S. Rajasekhara Reddy is all smiles after farmers presented him a PLOUGH after the launch of the Rythu Chaitanya Yatra in Kothapalli village of Rangareddy district on April 25, 2005. Photo: Mohammed Yousuf