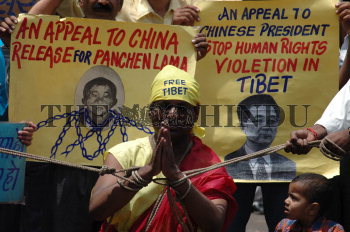 PROTEST FOR RELEASE TO PANCHEN LAMA

Caption : Members of the 'Council for Tibet's Freedom' protesting in Bhopal on the eve of Panchen Lama's birthday, with an apeal to China to release Panchen Lama, the world's youngest political prisoner. The Chinese authorities arrested this young boy and his family in 1995, just days after he was recognised as the Panchen Lama. Photo: A.M. Faruqui 24/04/2005