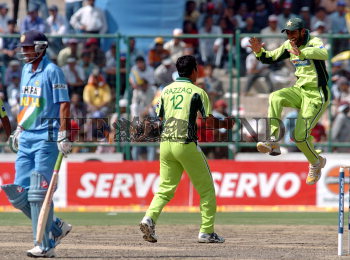 Caption : Pakistan bowler Abdul Razzaq celebrates with Shoaib Malik after getting Mohammad Kaif out during the sixth One Day International cricket match against India at Ferozeshah Kotla stadium in New Delhi on April 17, 2005. Photo: S. Subramanium