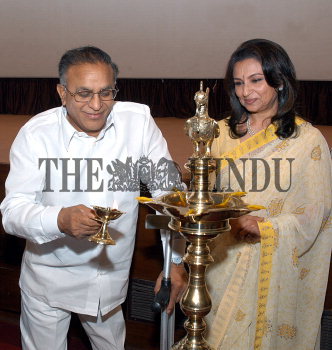 JAIPAL REDDY WITH SHARMILA TAGORE AT THE WEEKEND F

Caption : The Union Minister for Culture, Information and Broadcasting, Jaipal Reddy, along with the Chairperson of the Central Board of Film Certification (CBFC), Sharmila Tagore, lighting the traditional lamp to inaugurate a special retrospective of Satyajit Ray's films at the Siri Fort Auditorium in New Delhi on April 22, 2005. The film festival coincides with the golden jubilee year "Pather Panchali", released in 1955. The retrospective will feature the much-acclaimed Apu trilogy of "Pather Panchali'', "Aparajito'' and "Apur Sansar'' apart from the much popular "Charulata'' and "Pratidwandhi''. Photo: Shanker Chakravarty