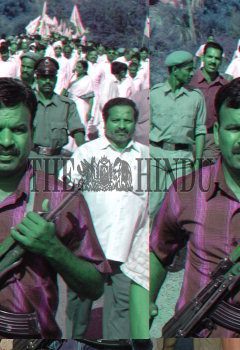 Caption : A tense-looking AK-totting gunman walks ahead of the 'Shanti Yatra' at Yacharam in Ranga Reddy on April 22, 2005, after Maoists were involved in a shoot out at nearby Manchala mandal. Photo: P.V. Sivakumar