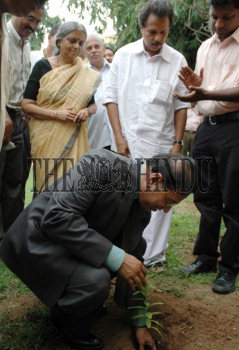 Caption : The Acting Chief Justice of the Kerala High Court, K.S. Radhakrishnan planting a sandal sapling on the premises of the High Court in connection with a function organised as a precursor to the World Earth Day in Kochi on April 20, 2005. Photo: Vipin Chandran