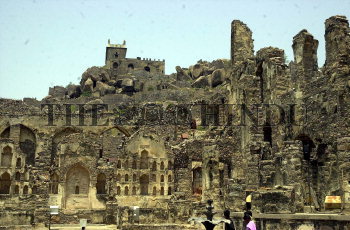 Caption : One of the famous and biggest on the Deccan Plateau, the Golconda Fort was built by the Qutub Shahi Kings who ruled between 1518 and 1687. The awe inspiring fort derives its name from the Golla Konda or the Shepherd's Hill and was built on a 400 feet high hill, 11 km west of Hyderabad city. Now in ruins, the Fort has some unique features. It has three lines of massive defence walls with the height of over 12 metres and a MOAT around. The outer fortification wall of 7 kms has 8 imposing gateways and is buttressed with 87 bastions rising to a height of 15 to 18 metres. It had good acoustics and a sustainable water supply system . Nagina Baug inside the Fort area was the place where diamonds used to be traded. The world famous "Kohinoor" diamond was mined in the eastern part of the then Golkonda Kingdom. Photo: Mohammed Yousuf 20-04-2005