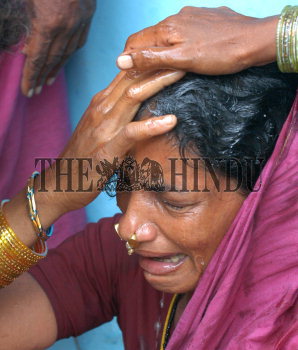 Caption : Behera Kumari, who lost her 14-year-old son in the crackers' blast at Nuvvalarevu in Srikakulam district, weeps inconsolably. He was standing nearby when the blast occurred killing him on the spot . Nine others also died in the blast on the night of April 19, 2005. Fireworks stocked in the house for week-long Sri Ramanavami celebrations caught fire leading to the tragedy. Photo: K.R. Deepak 20-04-2005