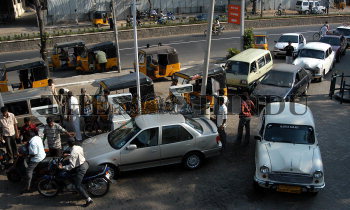 Caption : PETROL bunks downed their shutters for a day on April 18, 2005 demanding among other things increase of dealer margin to 5 per cent. Almost all the PETROL bunks in Chennai, barring those run by the oil companies themselves or by cooperative societies, wore a deserted look.. Here vehicles line up at a bunk run by a cooperative society to fill feul. According to dealers' association representatives, there are about 180 outlets in Chennai run by dealers and 10 owned and operated by oil companies. In Tamil Nadu, there are a total of 2,250 bunks, of which company owned bunks number about 200. Photo: Bijoy Ghosh