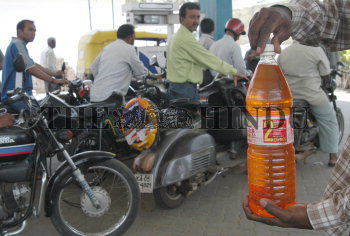 Caption : A motorist collects fuel in a bottle to run his vehicle in Bangalore, Karnataka, on April 18, 2005 as a large number of two-wheeler owners lined up to fill petrol as petrol dealers went on a nationwide strike demanding higher commission. Photo: G.R.N. Somashekar