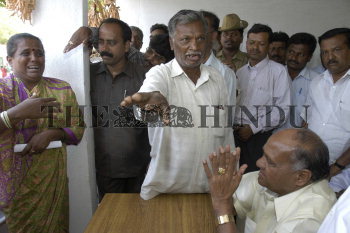 DISTRIBUTIONG OF CHEQUE TO THE HOOCH VICTIMS FAMIL

Caption : The Karnataka Housing Minister Anjana Murthy distributed Rs. one lakh cheque to the hooch victims family at their houses near Nelamangala on April 18, 2005. Here at Mathahalli while Gangamma (left) claim the victim Satyanarayana is her husband, the brothers and mother of the disceased says Satyanarayana is not married. Minister (right) seem worried and lost in thought. Photo: K. Gopinathan