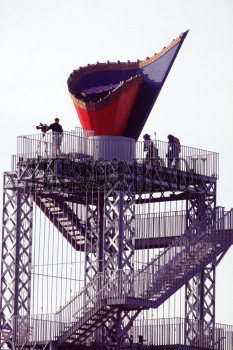 Caption : The bridge type Olympic Cauldron seen before it is lit up at the Olympic Stadium in Atlanta, United States during the Opening Ceremony of the Atlanta Olympics 1996 on July 19, 1996. Photo: Vino John