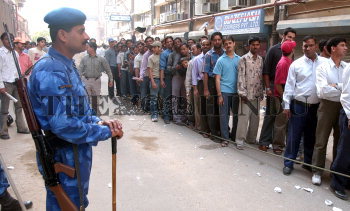 Caption : Cricket fans standing in a queue outside Central Bank of India, Parliament Street Branch for buying the tickets for the sixth One Day Internatioanl cricket match between India and Pakistan to be held at Ferozeshah Kotla ground in New Delhi on April 15, 2005. Photo: R. V. Moorthy