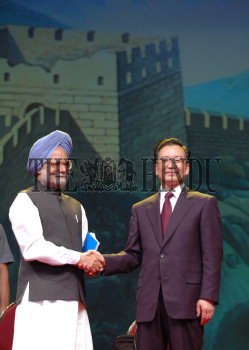 Caption : The Chinese Prime Minister Wen Jiabao and Prime Minister Manmohan Singh during the inauguration of a cultural evening organised jointly by Indio-China cultural COUNCILS in New Delhi to mark the 55th Anniversary of the establishment of Diplomatic Relations between both the countries. Photo: Rajeev Bhatt 14/04/2005