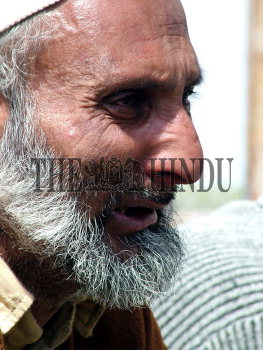 Caption : Wali Mohammad khan, father of Farooq Ahmad Khan of Kupwara, mourns at a graveyard in Srinagar on 11th Augest 2005. The Police and Army claimed that Farooq was a Pakistani Fidayeen and killed in an encounter at Nishat on 19th August 2003. The exhumation was issued by District Administration for the DNA test. Photo: Nissar Ahmad