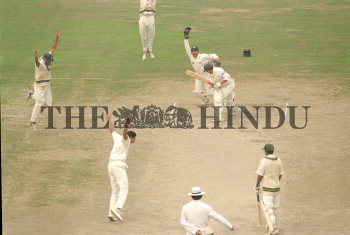 Caption : Pakistani batsman Shahid Afridi getting out caught by wicketkeeper Nayan Mongia of the bowling of ANIL KUMBLE in the second test match between India and Pakistan at the Feroshah Kotla ground in New Delhi on February 07, 1999. This was ANIL KUMBLE's first wicket of the innings and he went on to take all the ten wickets creating a world record.