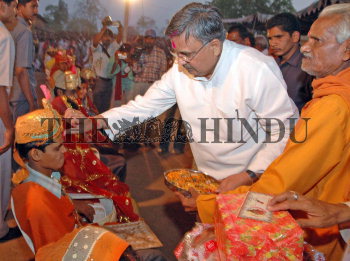 Caption : The Chhattisgarh Chief Minister Mr. Raman Singh felicitating the newly wed couples in a mass marriage of Kurmi Mahasabha at Simga near Raipur on April 09, 2005. Chhattisgarh Government is going to organise such mass marriages namely `Kanyadaan' for the weaker section of society from 27th of April in every district headquarter. Photo: Akhilesh Kumar