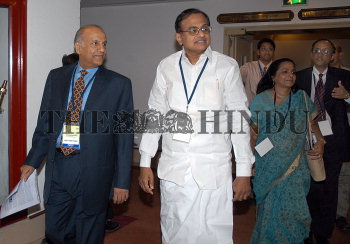 Caption : The Union Minister for Finance, P. Chidambaram, along with the Senior Vice-President of the Federation of Indian Chambers of Commerce and Industry (FICCI), Saroj Kumar Poddar (ext left), the Union Secretary for Agriculture and Cooperatives, Radha Singh (second right) and the the FICCI Secretary General, Amit Mitra (ext right), at the valedictory session of 'Agriculture Summit 2005: Reforms for Raising Farm Income' jointly organised by the Ministry of Agriculture, Government of India and FICCI, in New Delhi on April 10, 2005. Photo: V. Sudershan