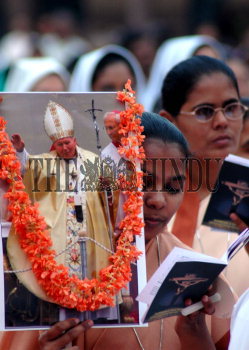 Caption : Christians take part in a special prayer service held for the late Pope John Paul II at the St. Mary's Church in Secunderabad, even as the Pope was laid to rest in the crypt of Saint Peter's Basilica in the Vatican on April 8, 2005. Photo: Mohammed Yousuf