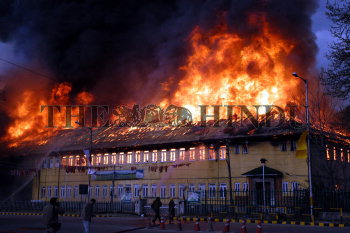 Caption : Tourist Reception Centre (TRC) in Srinagar, that lodged 29 of the passengers bound for Muzaffarabad, was set ablaze during an attack by a suicide squad on April 6, 2005, just a day ahead of the inaugural run of the Srinagar-Muzaffarabad bus service. Official sources said a group of militants, believed to be two in number, resorted to indiscriminate firing with their automatic weapons near the main gate of TRC. All the passengers are safe, official sources said. One of the two militants alleged to be involved in the attack is reportedly killed and some civilians have been injured. Photo: Shanker Chakravarty