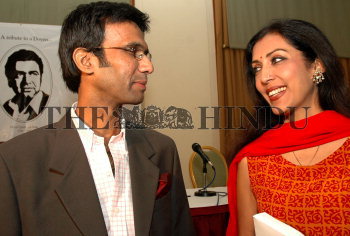 Caption : Mohammed Ali Baig, son of the doyen of Hyderabadi theatre, late Qadir Ali Baig interacting with Vani Ganapathy, danseuse and former wife of Kamal Haasan at the launch of Hyderabadi Theatre named after his father in Hyderabad on April 06, 2005. Qadir, playwright, was known for historical pageants between 1970 and 1984, and for his meaningful social satires in Urdu and Hindustani theatre. Photo: Mohammed Yousuf