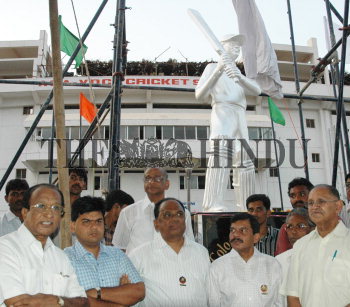 Caption : A bronze statue of the cricket legend Col. C.K. Nayudu, was unveiled at the ACA-VDCA Stadium, Visakhapatnam on April 4, 2005, a day before the second one-day international between India and Pakistan. The statue was unveiled by the president of Andhra Cricket Association K.V. RAO, (second from right). Among those present were A Prasanna Kumar, former Rector of AU and a noted sports writer, Praveen Prakash, the Collector, S.V. Adinarayana RAO, the Director General of PREMA Hospital, who donated the statue, and D. V. Subba RAO, a former president of the ACA. Photo: C.V. Subrahmanyam