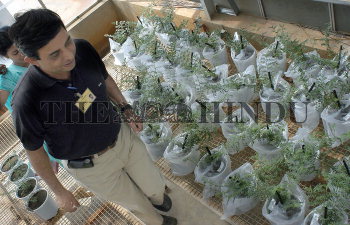 Caption : With the summer arriving it is not only the humans who suffer the heat but crops too. The International Crops Research Inistitute for the Semi-Arid Tropics (ICRISAT), headquarters in Hyderabad, is using transgenic technology to help chickpea and groundnut crops to deal with the rigor of drought. By genetically transforming chickpea and groundnut, scientists here are trying to enhance the crops' endurance to drought. Several independently transformed plants have been transplanted to the glasshouse and are now being tested under artificial drought conditions. The research is being implemented under collaboration with scientists from the Japan International Research Center for Agricultural Sciences. It will take few more years and several levels of testing before it reaches the farmers' field. Here a scientist busy handling the chickpea plants at a glasshouse of ICRISAT in Hyderabad on Monday April, 04, 2005. Photo: A. Roy Chowdhury