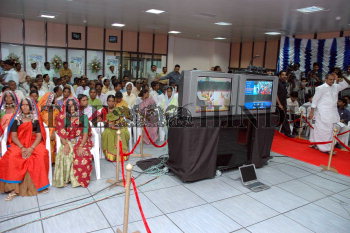 Caption : The Chief Minister Y.S.Rajasekhara Reddy, arriving at the VSNL studios in Hyderabad during the launch of the Rajiv Gandhi Grameen Vidyutikaran Yojna, which was done through video-conferencing from New Delhi by the Prime Minister Manmohan Singh and UPA chairperson Sonia Gandhi on April 04, 2005. Twelve Chief Ministers participated in the function, which was the largest of its kind in the country. The scheme aims at creating rural electricity infrastructure and completing household electrification Photo: Mohammed Yousuf