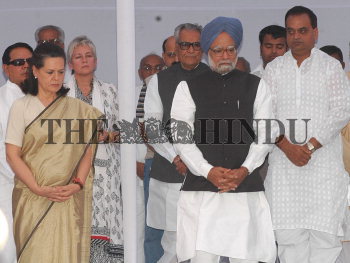 Caption : The Congress president Sonia Gandhi, the Indian Vice President Bahiron Singh Shekhawat and the Prime Minister Manmohan Singh, at a condolence meeting for O.P.Jindal, Haryana Power Minister, at his residence in New Delhi on April 3, 2005. The Haryana Power Minister, O.P. Jindal, 75, and his Cabinet colleague, Surender Singh, 59, were killed on March 31, 2005 when their helicopter crashed near Mehnge village in Saharanpur, Uttar Pradesh. They were on their way from Chandigarh to New Delhi. Photo: Anu Pushkarna