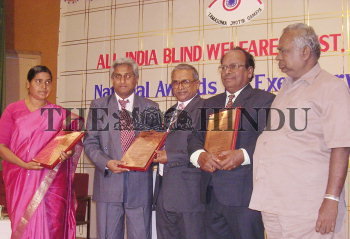 Caption : The Vice-Chancellor of Bharathidasan University C. Thangamuthu (third from left), presenting the 'National Award for Exemplary Service 2005' of All India Blind Welfare Trust to K. Raman Shankar (second from left) in Tiruchi on April 2, 2005. Also seen are the other recipients of the award, Kanthi Dass (ext left) and P. John Ebenezer (second from right, and the founder of the Trust, T. Asir Nallathambi (ext right). Photo: R.M. Rajarathinam