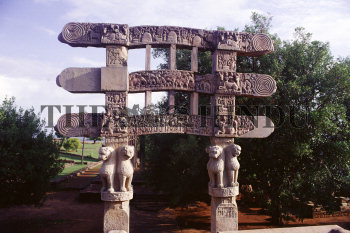 Caption : One of the gateways of the main Stupa at Sanchi in Madhya Pradesh. Sanchi, a serene and sleepy place atop a hill has the singular distinction of telling an uninterrupted Buddhist history of over 2000 years in stones. Sanchi has no direct relation with Buddha's life, but Emperor Ashoka chose this site to create an unrivalled complex of Buddhist monuments. It has STUPAS, chaityyars, temples, torn gateways, pillars and monasteries. Emperor Ashoka built eight STUPAS in stone at Sanchi. The STUPAS are architecturally superb and ornate with symbolic expressions of the teachings of Buddha. Photo: Kamal Narang