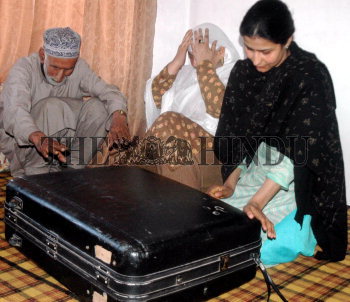 Caption : Mohammad Abdullah and his wife Ghulam Fatima, who live in Lal Bazaar, Srinagar, packing with the help of their second daughter, Nazir Bano, the gift items for their elder daughter and grandchildren, who live in Muzaffarabad. Abdullah and his wife are among the prospective passengers who will board the first Srinagar-Muzaffarabad bus. They are going to see their elder daughter who is married to her cousin in Muzaffarabad in 1988. Four militant organisations have issued a threat to disrupt the bus service that is scheduled to begin on April 7, 2005. Inspite of the threat, the passengers have said that they would still board the bus to see their relatives across the Line of Control. The threat has come as a shock to the divided families, who have been waiting for many decades to see this (the bus service) happen. Photo: Nissar Ahmad, 31-3-2005