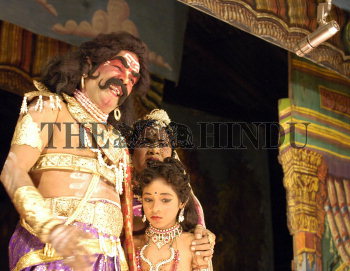 Caption : For the famed Surabhi theatre group, it is busines as usual. In Hyderabad, for the past two months, for a six-month long performance funded by the Department of Culture, they were staging 'Bhakta Prahlada' to a near empty house at Public Gardens while a Telugu film being screened at the nearby Lalitha Kala Thoranam drew a houseful crowd. But, the show must go on. A scene from the show on World Theatre Day, March 27, 2005. Photo: H. Satish