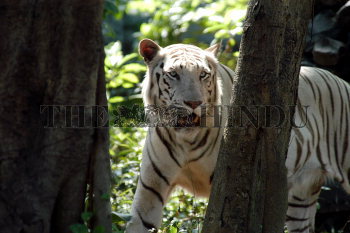 Caption : "The White Tiger in peril": A White Tiger takes a walk in the open area at the Zoological Garden, in Kolkata on March 26, 2005. The White Tigers are a depleting species with a population of less than 133 in the whole world, all of which are confined to life in captivity. The Cincinnati Zoo in Ohio has the highest population, though the LINEAGE derives completely from India. Because there are just three gene pools, all of which are native and born in India, inbreeding depressions have shown up in the White tiger, causing stillbirths, early mortality rates, reduced fertility and emergence of physical deformities in the newborns. During the last 100 years, only about 12 white tigers have been spotted in the wild in India, giving an approximate ratio of 1 White Tiger for every 10,000 normal pigmented (orange) tigers. Photo: Parth Sanyal