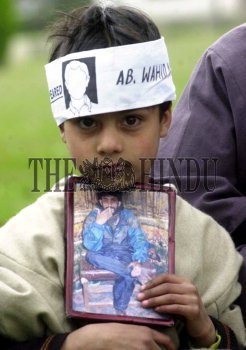 Caption : Sabarat Rashid, the seven year old daughter of Abdul Rashid Gania, a farmer of Kulangum HandWara, who was found missing from 1998, at a demonstration at Sher-i-Kashmir Park in Srinagar on March 25, 2005. The Association of Parents of Disappeared Persons (APDP) alleges that more than 8000 people were missing after they were picked up by the security forces. Photo: Nissar Ahmad